This summer has been anything but quiet. Between the June Brexit vote, several headline-grabbing jobs reports, the winding path of oil prices, and all-time highs for stocks, there has been a lot of activity to absorb in these past couple of months. Not to mention that we are in the midst of a U.S. presidential election and the speculation that comes with it. Here are some of the highlights as we sift through the headlines and digest all the data.

To start, stocks have been on a roll lately. July saw a new all-time high for the S&P 500 (the first since May 2015) and a 3.7% gain for the month—putting the market on its first five-month winning streak in two years.

In general, the U.S. economy has provided a favorable backdrop for stock market gains in July and early August. There is a strong backdrop for consumer spending, including an improving job market, low inflation and interest rates, rising home prices, and the seven-year bull market for stocks. During the second quarter, consumer spending posted its second highest quarterly growth since the end of the Great Recession. The 287,000 jobs created in June and 255,000 in July both handily topped economists’ expectations and recent trends.

One July data release that disappointed was second quarter 2016 gross domestic product (GDP). Real (inflation-adjusted) growth came in at an annualized rate of 1.2%, well below consensus expectations. But underperformance was largely driven by the inventory component, which pulled over 1% from second quarter GDP and will likely be reversed in the coming quarters. 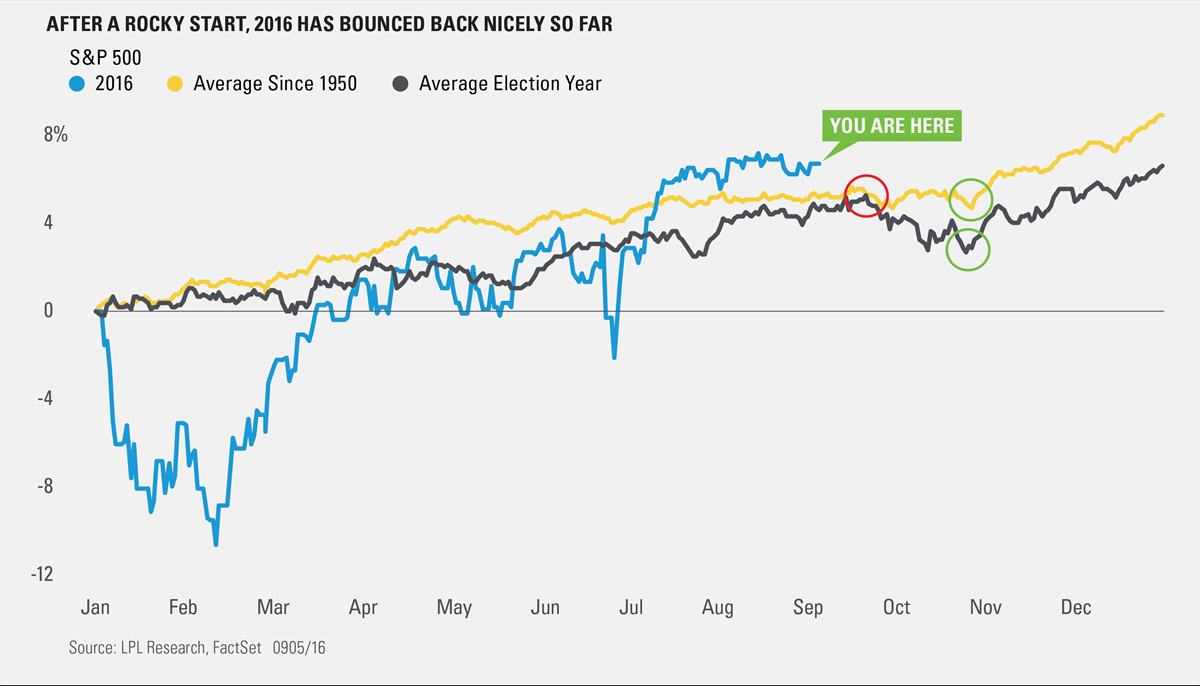 Looking ahead, there are several potential market-moving events on the calendar. The Federal Reserve (Fed), European Central Bank (ECB), Bank of England (BOE), and Bank of Japan (BOJ) all meet in September. In its mid-July meeting, the Fed shored up the market’s confidence that the next rate hike was likely to come after the election, while markets expect the ECB, BOE, and BOJ to do more.

Oil also remains closely watched and may be influenced by reports of an OPEC meeting in late September. And with second quarter earnings season behind us, market participants will shift focus to the potential end of the earnings recession later this year.

All of this suggests a generally favorable backdrop for stocks, but not complacency. This bull market is one of the longest in history, stock valuations are above average, and August and September have been historically weak months. Through all of this, we must stay prepared for further stock market volatility. The good news is there do not appear to be signs that pronounced stock market weakness is coming, which means dips may be opportunities to buy. As this busy summer full of stock market action, central bank speculation, and political headlines continues into the fall, we must strive to maintain our long-term perspective, key to potential future success.