On September 3rd 1987 Joe Rocco, our firm’s founder, transitioned Rocco & Associates from a team at Paine Webber, an old brokerage firm, to the independent firm we all know and love today. Not even two full months later, on October 27th, 1987 the Dow Jones Industrial Average (the “Dow”) fell 508 points, which at the time represented 22.61% of its entire value. The day is now known as Black Monday. While recent headlines remind us that Monday February 5th, 2018 was the largest point drop in the history of the Dow, it was “only” a drop of 4.6%. What did Joe say when I asked his opinion? “At least now we have the internet!”[1] While 4.6% is not 22.6%, it is by no means insignificant. This month we want to explore three potential causes of the drop and the likelihood of it recurring in the future.

Market Fundamentals look strong. Companies are still reporting record earnings, and the effects of corporate tax reform have yet to be fully felt. Therefore we want to let everyone know first and foremost that we do not believe this to be the beginning of the next recession. In fact we believe that it was wage growth[2] that actually put fear into the markets. Why are rising wages bad? They aren’t bad, but they do could indicate rising inflation, which in turn indicates rising interest rates and higher interest rates make it harder to make money in the stock market. However, while interest rates are higher now than they have been since the mid-2000s, we do not expect them to rise very quickly like the 11.5% jump they made from June to December of 1980. A slow and steady climb of 0.25% per quarter, we feel, is largely priced into the market and also is not catastrophic for bonds. However, the market is also historically volatile. Since 1980 the market has been positive 28 of 37 years. But the market has been down, on average, 14.1% at some point during each of those years. 21 of those years the market has been down by at least double digits, before finishing up 13 out of 21 times (62%). Bigger intra-year swings are just a fact of investing and increased volatility, or a return to normal volatility, may unfortunately be here to stay. 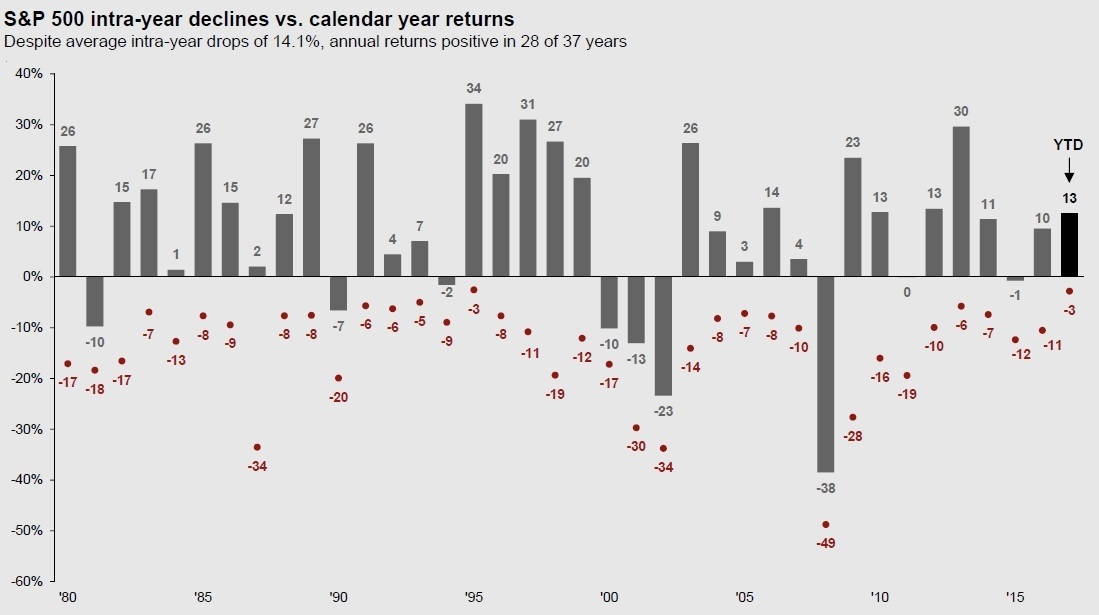 Tax cuts. Rising federal funds rates. A new chair of the Federal Reserve. Change is real and it is happening all at once. While most of this change is “priced in” to the market, meaning that it is already reflected in stock prices, we aren’t so sure that the effect of the changes happening simultaneously, are fully understood. In mid-2008 the Federal Reserve balance sheet, essentially the amount of bonds the Fed owns through their money printing efforts, stood at $1 trillion dollars. By October 2014 that number was $4 trillion. Now the Fed is expected to reduce their balance sheet, thus reducing the amount of money in circulation (most of it being invested in the markets), by $1 trillion dollars per year starting in 2018. However, the money supply may also be increased by the recent tax cuts that should keep more money in the pockets of consumers and corporations, but will that money flow back into the markets? That remains to be seen. Lastly, it would be prudent to mention that the current administration carries a certain amount of “headline” risk. While these headlines have yet to significantly impact the stock market, we could see that change, do to the last factor we are going to discuss below. 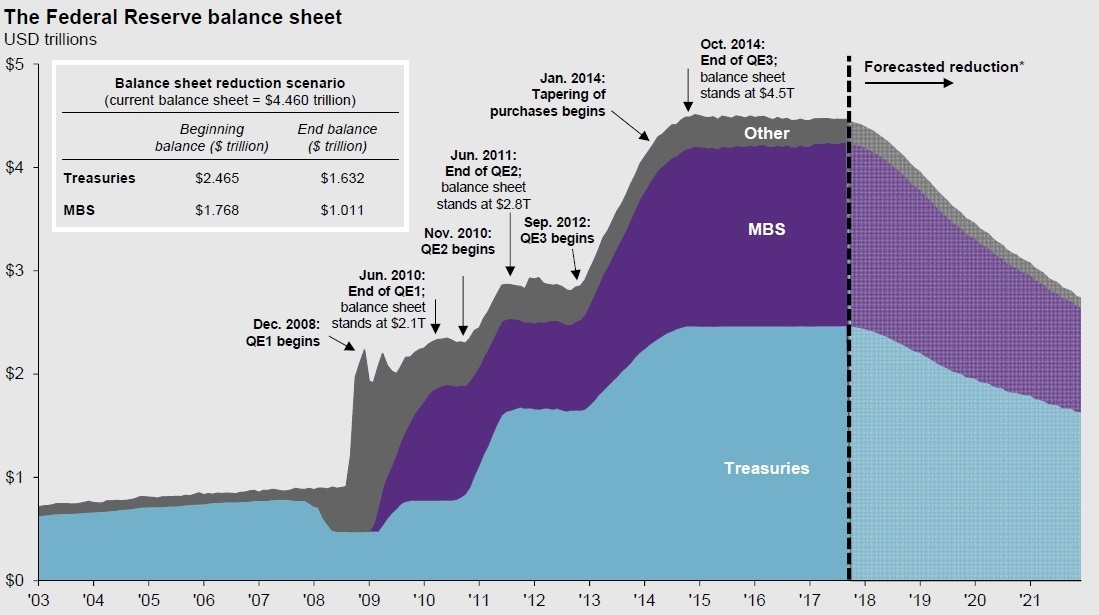 We have nothing against passive investing. In fact we actually use it in our strategies, as noted in a recent Q&A with R&A post. However, it does have some limitations. In our opinion the number one concern is the creation of a “herd” of investors. We call it a zero sum game because when the broad market goes up, your investment goes up and vice versa. A sharp decline in one or two stocks, especially if those stocks are large like Apple or Amazon, could lead to significant declines for the entire passive investment, because those stocks make up a larger portion of the S&P 500 for no other reason that they are larger companies. Additionally, most passive investing is done in ETFs, which trade on an exchange (whereas a mutual fund you trade with the company). Since they trade on an exchange, investors in ETFs can put in what are called stop loss orders at certain market points to trigger automatic selling. While this seems like a “safer” play to many investors, if the market is moving rapidly you can actually end up selling for much less than you intended. For example, on Monday (2/6/2018) the Dow dropped sharply after it hit 25,000 and then even more dramatically at 24,000. If you had put a stop loss order on an ETF for 24,000 you likely would have sold you position when the Dow was around 23,800, which is what it plunged to after it crossed 24,000. Yet it finished the day at 24,100 and is currently at 24,700, so you would have realized a loss of 900 points (3.8%), because everyone tried to sell at once.

We realize that this return to normal levels volatility can be scary, but we want you to know that we are here to help. If you want to talk about the markets and how your portfolio is positioned please do not hesitate to reach out. We want to hear from you and make sure your expectations are meeting your reality. As a part of our investment monitoring process, we are constantly evaluating our strategies. In fact, this publication was generated after a special Investment Committee Meeting was called to assess market volatility. In addition, your financial plan assumes volatility, in fact we stress test every plan we create with 2008 like numbers on an annual basis. So just because the market gets bumpy or goes down, does not mean that your financial goals are in jeopardy. We look forward to talking soon!

[1] In 1987 there was no internet, so Joe and his partner were forced to hang out their office windows with transistor radios.

[2] I mentioned this to a client recently, and their response was, “well my wages haven’t gone up, where is the growth!” And that is sadly true in Connecticut, we still do not have the wage growth that we are seeing in other parts of the country.

The opinions voiced in this material are for general information only and are not intended to provide specific advice or recommendations for any individual security. To determine which investment(s) may be appropriate for you, consult your financial advisor prior to investing.

All performance referenced is historical and is no guarantee of future results.

Economic forecasts set forth may not develop as predicted. All market indexes discussed are unmanaged and are not illustrative of any particular investment. Indexes do not incur management fees, costs and expenses, and cannot be invested into directly.

The S&P 500 Index is a capitalization-weighted index of 500 stocks designed to measure performance of the broad domestic economy through changes in the
aggregate market value of 500 stocks representing all major industries.

Investing involves risks, including possible loss of principal. No investment strategy or risk management technique can guarantee return or eliminate risk in all market environments.