Donald Trump has completed his landmark quest and will become the nation’s 45th President after a contentious and often divisive campaign. In addition, the Republican Party has retained control of both houses of Congress. This outcome marks a significant reversal from just a few weeks ago when a Hillary Clinton presidency was highly probable and even a Democratic party sweep of Congress was possible.

While this outcome is certainly a shock to many, it is important to remember that the result isn’t a surprise to the plurality of American voters that spoke their collective will at the ballot boxes yesterday.  The strength of a democracy is not in whether we like the outcome, but rather in how we accept the result as the voice and will of our republic.

While many things are promised on the campaign trail, all newly elected Presidents enter with a constrained ability to enact their agenda unilaterally. As a result, immediate and sweeping political changes are a process, which give markets and the American public time to digest and react. Although often derided by partisans, the inability of a President to swiftly change policies is a strength of our political system, not a weakness of it.

Moreover, the current market volatility is not because Trump was elected President, as markets do not have political affiliations. Rather, it reflects the market’s adjustment to a surprise presidential winner and the market’s tentativeness regarding the vast uncertainty over which of President-elect Trump’s stated policies he will be able to enact. The first major step towards clarity will come with Trump’s choices for key administration officials; his selections will give a better sense of the priorities for the Trump administration. This should provide some path to further understanding and calm markets. 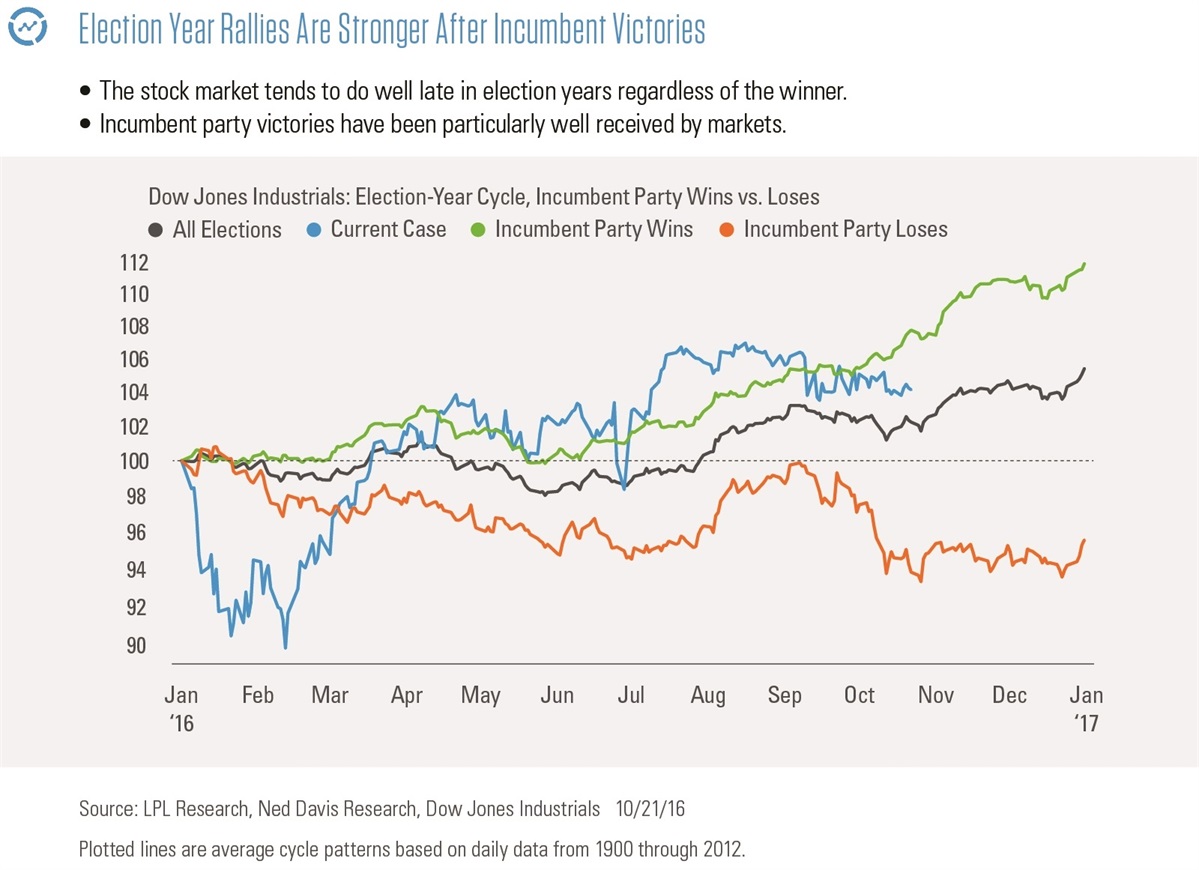 For the first time in 10 years, the Republican party will have control of the Presidency and both houses of Congress. As in all things, this may solve some problems, and perhaps exacerbate others. For example, potentially divisive upcoming issues, such as the necessary expansion of the debt ceiling and reforms to the corporate tax code, could be easier to navigate. There is a common perception that the markets like divided government. While that may often be correct, it is not necessarily true at every point in time.

Most importantly, however, over time we have witnessed corporations and financial markets adapting smoothly to new political environments. The uncertainty surrounding the Trump presidency could be greater than a typical transition; therefore, the markets may take additional time to process any changes. However, the uncertainty itself is not unusual.

Separating political views and emotions from investment decisions is difficult. Whether this election result was your favored outcome or not, what we have learned over the years is that although Presidents can set an overall tone for the markets, over the long term, it is the underlying fundamentals of the economy and the strength of corporate profits that matter more. Overall, we continue to be encouraged by the underlying fundamentals in the economy and the related resilience of the stock market. Recently, encouraging economic data, including a record 73 consecutive months of private sector jobs growth, high consumer confidence, and an increase in manufacturing activity, all suggest a recession in the next year is unlikely.[1] And, although the stock market has been essentially flat over the past three months, the S&P 500 has returned 5.2% year to date (through market close on November 8, 2016).

As this historic election cycle comes to a close, I suggest casting a “vote of confidence” for the U.S. economy and markets. While uncertainty will certainly be prevalent over the short-run, our political and economic systems are resilient and can, after a period of adjustment, adapt to new realities. As investors, we all need to try and put this election into perspective, as our investment horizons extend far beyond yesterday’s votes or any political cycle. And, the keys to your investment success of relying on independent investment advice and sticking to your long-term investment strategies should not change, regardless of who is in office.

As always, if you have questions, I encourage you to contact us.

1 According to U.S. Bureau of Labor Statistics, ISM Manufacturing Index, and Consumer Confidence Index data as of 11/7/16